By Marc A. Wites
Florida is a peculiar state for car insurance. We are one of the few states in America with a no-fault auto insurance system.  This means that if you are in a car accident, your own automobile insurance covers your claims for lost wages and medical expenses, up to $10,000 (less applicable deductibles). This is known as Personal Injury Protection, or “PIP” for short. So, even if the other guy caused the crash, your own insurance pays first. 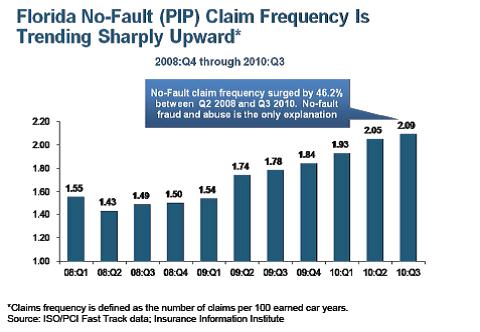 Another thing that makes Florida unique is that it is one of the few states that requires only that drivers carry the no-fault coverage, PIP, and Property Damage coverage in the amount of $10,000.  If you find this odd, you are not alone.  $10,000 in PIP coverage, and $10,000 in Property Damage coverage, is all it takes to legally drive a car in Florida (that, and passing your driver’s test).
Florida drivers are not required to have bodily injury coverage, which pays for claims that might be brought against you if you cause the crash; are not required to have Med Pay, which would provide for the payment of your medical bills in excess of $10,000; and are not required to have what is called UM Coverage, which covers you in the event that the driver that caused the crash does not have any insurance (i.e., Uninsured Motorist) or enough insurance (i.e., Underinsured Motorist).
One could debate whether or not Florida’s non-fault/PIP insurance scheme is a good system, given that it was passed in 1971 when medical expenses and the costs to repair a car were far, far less; the minimum coverages have never been raised.  Also, the system is arguably unconstitutional now that the Affordable Care Act (Obamacare) requires everyone to have insurance. Moreover, in consideration for this bargain, whereby you can recover from your own insurance carrier for lost wages and medical expenses regardless of fault, you cannot pursue claims against the driver that caused the crash (commonly called the at-fault driver) for pain and suffering unless you suffer what the law defines as a permanent injury. These, however, are topics for another day.
So, let’s say you are unfortunately in a car crash, it’s the other driver’s fault, and you have significant medical expenses, lost wages, and/or pain and suffering. Hopefully, the other driver has bodily injury coverage and/or you have UM coverage.
As another aside, in a state like Florida, where millions of people drive without a license or any insurance, with only the minimum insurance required, or with very little bodily injury coverage, it’s a very good idea to have UM coverage.  Again, UM coverage protects you when the at-fault driver has no insurance or does not have enough insurance to cover your claims.  You also should carry enough bodily injury coverage to protect your assets in the event you cause a crash.  And always remember, if you don’t have Bodily Injury and UM Coverage, you don’t have “full coverage” despite what your insurance agent may tell you. But, I digress.
If the at-fault driver has bodily injury coverage, and/or if you have UM coverage, you can bring a claim against the at-fault driver and/or your UM insurer, and pursue four main areas of relief through a claim based on the driver’s negligent operation of the vehicle.
First, you can seek the recovery of your medical expenses, including the medical expenses that resulted from the crash, such as a hospital visit, physical therapy and/or surgery. You can also recover future medical expenses if the injury you suffered in the crash will require more care later in your life.
Second, you can recover money for your lost wages.  Of course, you’ll need proof that you were unable to work, and of the amount of wages that you lost.
Third, you can seek monetary damages for pain and suffering, and mental anguish, which resulted from the crash if you can prove that you suffered a permanent injury.
Last, and not necessarily least, you can seek to recover the cost to repair your own vehicle, or the value of your vehicle if the vehicle is deemed a total loss.
Keep in mind that whether the claim is brought against you, or if you bring the claim against someone else, your insurance will only pay up to the amount of coverage available under the policy.  For example, if your policy includes a limit of $50,000 in bodily injury coverage, you are the at-fault driver, and the person you injured has a claim valued in excess of $50,000, you will be personally liable for any damages in excess of $50,000.
Car insurance is something that most of us pay for, and hopefully never have to use.  But, if you do, it is good for something.  Just make sure that you have enough coverage to protect you and your family, and hope that the at-fault driver does too.
Or, better yet, since you are buying insurance, don’t “hope” for the right outcome; instead, insure for it.  Buy UM coverage.  Although I hope I will never need it, I have it, and you should too.
Marc A. Wites is an attorney and a shareholder of Wites Law Firm, a law firm which represents injured people and their families in personal injury and wrongful death actions, class actions, investment fraud matters, consumer debt litigation, and immigration.

PREV
Qué hace la Acción Ejecutiva sobre inmigración del Presidente Obama?
NEXT
Why Do You Need A Lawyer To Handle An Insurance Claim?